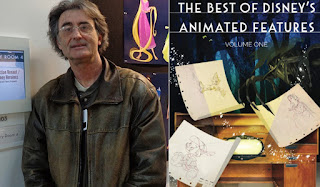 This just in from my friend, historian Christian Renaut:

[SECOND POLL!  Hi everyone ! First, thanks for the many nice comments after the publication of volume 1 of The Best of Disney’s animated features. Volume 2 is well under way with the analysis of 10 more unforgettable sequences from 1941 to 1951. But now is the time to launch my second poll to already prepare volumes 4 and 5 at least. So, whether you are a Disney historian, a current/former Disney artist, working in animation, a Disney artist’s relative, or a Disney fan, it is time for you to select your unforgettable moments/sequences from the films of the list below (1970 to 1999). Try to stick to a maximum of 12 highlights. The best thing to do is to also justify your choice and come up with anecdotes (in particular if you worked on those films-you might be quoted). Then, like for the films under Walt, I’ll draw my list of the sequences to write about from the results of that poll. To do so, write a mail to this address chpoll.wd@gmail.com    Thanks a lot!