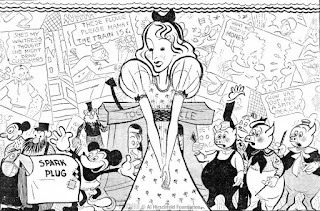 The Broadway show As Thousands Cheer (music and lyrics by Irving Berlin) opened on September 30, 1933 and closed on September 8, 1934 after 400 performances. It included a scene called "The Funnies" which featured Mickey Mouse and the Three Little Pigs. Hence this drawing by Al Hirschfeld.

I have seen one photo of that scene in the past and am currently looking for a high resolution version of it.
Posted by Didier Ghez at 5:48 AM