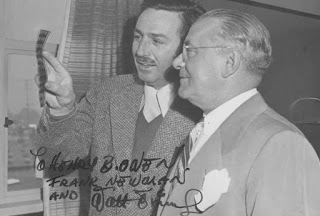 I was conducting some research yesterday about the creation of a logo / mascot named King Mike by Disney artist Hank Porter for the King Radio station, in the context of David Lesjak's upcoming monograph about Hank Porter (that monograph will be a must have).

And that is when I stumbled upon this incredible photograph (c. 1947) of Walt Disney with Frank L. Newman. Yes, this is the same Frank Newman of Newman Laugh-O-Grams, who by then had moved to Seattle and become president of Evergreen Theatres Corporation.

The full story of how Walt and Newman met again via King Radio, will probably be told in David's upcoming monograph.

Fascinating, it's also interesting to note in the recently published book Hold That Ghost: Including the Original Shooting Script by Ron Palumbo there is mention of Milton Feld who contracted to make the Laugh-o-grams and later become an Executive Producer at Universal on the Abbott and Costello movies before passing away at age 53 in 1947.