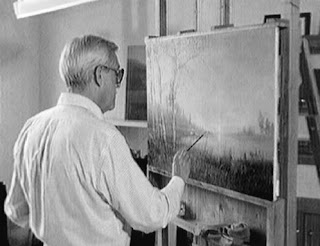 [Didier- Don’t know if you were ever a fan of Motion Picture Special effects, but this short video with Albert Whitlock, who had worked at Disney in the '50s and early '60s, has a nice piece about Whitlock’s work on “Ten Who Dared” an early '60s Disney Film about John Wesley Powell - Explorer of the Colorado River.

Anyway, he talks about one matte painting in the film and how Walt did not like it and his solution.

I have heard the story referenced before, but this is from the Horse’s mouth, as the saying goes!

This link takes you to a wonderful website about Matte Painting by a fellow in New Zealand. This entry is all about Disney Films and contains images that Whitlock refers to in his video.]