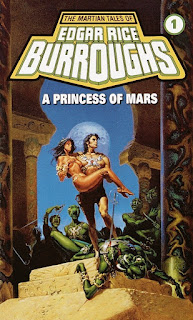 Like many of you I am currently watching the final episodes of Game of Thrones. As you know the series is based on books by author George R.R. Martin. Is there a link between Martin and Disney? It turns out there is, via Edgar Rice Burroughs!

In the 1990s, the Walt Disney Studios was trying to adapt A Princess of Mars to the screen and asked Melinda M. Snodgrass and George R.R. Martin to write a treatment. Copies of the work they did on the project can be found at the Cushing Library.
Posted by Didier Ghez at 12:02 AM