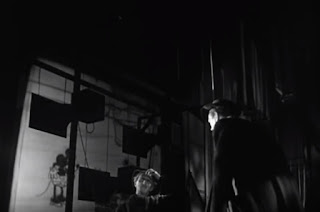 [Here is another entry to the list of a Disney-film within a non-Disney film that I have discovered;

“Portrait of Jennie” (1948), with Joseph Cotten and Jennifer Jones. The film is directed by William Dieterle and produced by David O. Selznick (Vanguard Films).

In this very strange film, there is a sequence where Joseph Cotten’s character is having a conversation with an old doorman at a (cinema) theatre. In the background you can see an old Mickey Mouse short from the early 1930s being screened.

The sequence with the Mickey Mouse short can been seen from ca. 29:50.
I haven’t been able to identify the short, but perhaps David Gerstein or someone else can help?]

[UPDATE:
Hello, Didier.  I tried to post a comment on your Disney History Blog website, but I don't think it worked the last few times, so I am sending it by e-mail:

The Mickey Mouse cartoon seen in the background in "Portrait of Jennie" is 1931's "The Delivery Boy."  In the first few scenes, Mickey and Minnie are singing and dancing to a jazzy version of the song "In the Shade of the Old Apple Tree."  Later, they are playing "Stars and Stripes Forever" on the piano.  Some of the piano scenes are out of order.  No scenes of Pluto or farm animals were included, except for a brief final shot of a pig holding a saxophone (through which a smaller pig is pumping water).  During this sequence in the movie theater, the images from "The Delivery Boy" are reversed because Joseph Cotten and  Felix Bressart are behind the screen.

This excerpt is from 'The Delivery Boy' from 1931.

I enjoy your blog, and thank you for all your books!