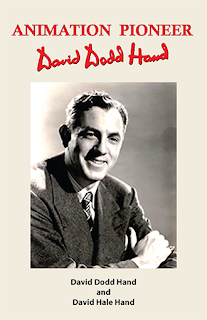 I was happily surprised by the re-release of the autobiography of Disney director Dave Hand by Theme Park Press. I initially thought that the book would be a straight re-print of the book that had been released in the mid-'80s, but when I got my own copy of this new version, I realized that it contained quite a bit more, including a large section of gag drawings (non-Disney-related), memories by Dave's son, remembrances by his colleagues and even a few illustrations which did not appear in the original book. Sadly, in the core of his autobiography, Hand does not discuss his career at Disney in any depth. Thankfully this flaw is compensated by Michael Barrier's interview with Hand included at the end of the book.

So, if you do not already have this book and are interested in the career of Disney's right hand man on Snow White and the Seven Dwarfs, this volume is definitely worth picking up.
Posted by Didier Ghez at 4:49 AM