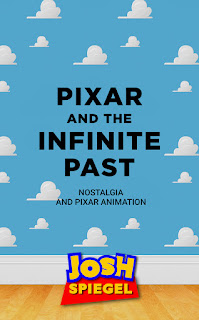 This just in from Theme Park Press about this new book, for your information:

[The Past in Mint Condition
Film critic Josh Spiegel analyzes in depth the poignant themes of loss and nostalgia that run beneath the exuberant playfulness of the Toy Story and Cars films. He concludes with a chapter on Disney animation in the 2010s. With photos.Pixar tickled a yearning in adults who gave up their own Woodys and Buzzes but still cling to the idealized wood and plastic and stuffing of their lost-forever youth. As their own children face forward to the future with Buzz Lightyear's "To infinity...and beyond!" they hear just an echo from their past.Spiegel adroitly positions the Pixar films as not just animated fodder for the kids but as surprisingly sophisticated—and introspective—fare for the grown-ups."Affectionate, vivid, and insightful. ... Even if you've seen these movies a thousand times, you'll discover something new about how yearning for the past defined the future of animation."
—Anthony Breznican, Entertainment Weekly]
Posted by Didier Ghez at 4:01 AM