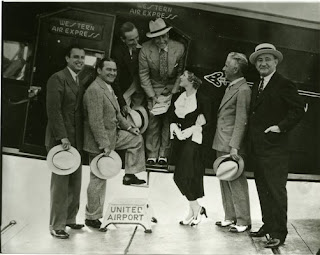 [I found this very interesting photo on a Charlie Chaplin website to day:

Members of United Artists at United Airport in Burbank, July 1933

The first four were heading to Chicago for a convention of film exhibitors.

Link to the blog posting for details and identification:

Futher information about the four lesser known persons on the photo:

Great find, Are. Thanks for sharing!