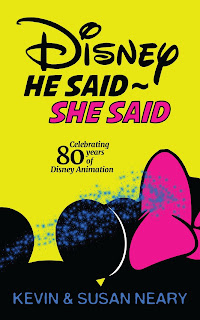 OK, I admit that this specific new book is not totally up my alley but I know many of you will want to know that it exists.

The authors are good people: The Nearys wrote the official Hidden Mickeys book, released by Disney Editions (and the only one now sold in the Disney theme parks). In addition, they co-wrote the great  The Disney Park Maps, also for Disney Editions, and Kevin Neary collaborated with Dave Smith on four Disney trivia books, in the 1990s.
Posted by Didier Ghez at 6:37 AM