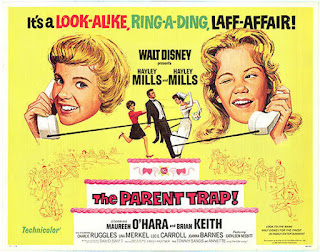 This just in from filmmaker Aaron Pacentine:


[I'm a filmmaker and producer with FamilyFilmsProductions.com I wanted to bring to your attention a brand new independent documentary film on The Parent Trap. Hayley Mills is participating and others from the 1961 film and sequels. I have already received clearance from Disney to go ahead with my documentary. We are also in the process of arranging to using music from the 1961 film as well.

We are trying to get the word out on the project and trying to raise the funds.]

I have no information about the project beyond this. I might support it this week.
Posted by Didier Ghez at 5:26 AM

The Lindsay Lohan version of Parent Trap is my favorite; although the 1961 original is a bit weird for me. But I like Hayley Mills most in Pollyanna, The Moon Spinners, In Search of the Castaways, and the Midsomer Murders episode she's in.