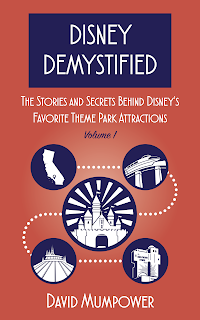 This just in from Bob McLain from Theme Park Press. The book is available at this link.

[Who Let the Mouse Out of the Bag?

In a vault deep beneath Main Street, U.S.A., under princess lock and skeleton key, Disney keeps its big, forbidden book of secrets. This isn't that book. But it's probably the closest we'll ever get to the tales that Disney doesn't tell about your favorite theme park attractions.

For most guests at a Disney theme park, it's enough to know when the park opens, where the rides are, and how long it'll take to get on those rides.

But that's not you, is it? You're not a low-information guest.

You know that a Disney attraction doesn't just pop up in a park one day, no questions asked. There's a method to the magic, a plan for making all that pixie dust happen, a high-stakes, high-thrills narrative available—once upon a time—to insiders only. Now it's demystified for one and all.

Put down that FastPass. You won't need it. You're in the right queue for E-ticket adventures behind the scenes at the Jungle Cruise, the Haunted Mansion, Pirates of the Caribbean, Space Mountain, Tower of Terror, and many more. Boarding now...

Disney Demystified! When the mystery ends, the magic really begins!]