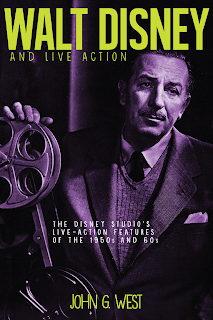 Theme Park Press is releasing a great amount of new books this week. I will be mentioning some of them on the blog over the next few days, starting with this one. John G. West's book about Disney's live-action features is a classic and one that any serious Disney historian should already have on their bookshelves. This reprint includes a large amount of never-seen-before photographs, which makes it even more exciting. The publisher wrote:

From blockbuster movies like 20,000 Leagues Under the Sea, Mary Poppins, and Treasure Island, to such lesser-known efforts as Savage Sam and Monkeys, Go Home!, West describes the production of each film in detail, with backstage stories and complete cast and crew information.

The small screen output of the Disney studio is given similar treatment: over 70 episodes of Zorro, Texas John Slaughter, Davy Crockett, and other TV series are described and catalogued, along with in-depth analyses of the shows themselves.

Plus, the book features over 80 photos, many of them never seen before, including candid shots of Walt Disney in his office.

Very promising. Any idea how good the quality of the photos is? The cover photo by George Hurrell looks more than a little muddy (I believe that photo also predates the production of the live-action and TV films, but that's another matter).

In his 1997 book, "The Magic Kingdom: Walt Disney and the American Way of Life," Steven Watts said that there were "synopses and brief evaluations of the ... live-action films of the 1950s and 1960s" in Leonard Maltin's now classic volume, "The Disney Films" (from 1973, updated several times since). But, Watts noted, "the only extended treatment of these movies, their making, and the key personnel involved is John G. West, ]r.’s The Disney Live-Action Productions.”

Watts was talking about West's original 266-page edition. This new edition, expanded to 354 pages, sounds very promising indeed. Especially, for those who favor classic (pre-Eisner, pre-Iger) Disney, because its focus is entirely on the live-action films and shows made during Walt's time -- unlike Bill Cotter's 1997 Disney Editions book bearing the slightly deceptively title, "The Wonderful World of Disney Television."

Thanks for your interest! (And thank you Didier for letting people know about my book!) The book's cover photo is actually by famed portrait photographer Yousuf Karsh, and it was taken in 1955 and appeared in LOOK magazine. I discovered that this wonderful photo is now in the public domain, but the only way I could get it for use was to scan it from a copy of LOOK. As for the photos in the book, most of them come from the LOOK magazine archive at the Library of Congress and they were reprinted from negatives or original materials at the Library of Congress. Some are really clear; others come from proof sheets so enlarging them does muddy them a bit. And the book itself is not a photo book... these are all black and white photos on standard acid free paper, not glossy photo paper. But there are definitely some photos that haven't been seen before. My personal favorite is one of the dog that played Old Yeller wandering outside the under construction set for Zorro on the Disney backlot. Another favorite is the series of photos of Walt with his grandson wearing a Davy Crockett cap.

I am extraordinarily grateful to Bob McLain at Theme Park Press for bringing my book back into print after all these years. I used the opportunity to add new production histories for six additional live-action features, expand existing production histories, and add more material from my interview with Director Ken Annakin.