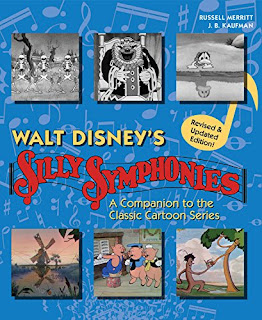 With the upcoming release of the updated edition of the seminal book Walt Disney's Silly Symphonies: A Companion to the Classic Cartoon Series, I took time last week to interview one of its authors, my good friend, Disney historian J.B. Kaufman.


Didier Ghez: Could you tell us about the genesis of this new book?

J.B. Kaufman: The first edition of the book was published in 2006, but there were distribution problems and it didn't reach a very wide audience. Russell and I always thought it would be nice to give the book a second chance -- and, at the same time, rework the text and upgrade the illustrations. We got our chance when the Disney company launched a fresh initiative involving the Silly Symphonies. Those live Silly Symphony concert presentations, with full orchestra, are exciting, and the big "Silly Symphony Collection" LP set, released last year by Walt Disney Records and Fairfax Classics, is even more exciting. Tying in with those projects, Disney Editions offered us an opportunity to produce a new edition of our book. Of course we jumped at the chance.

DG: What were the major changes, additions and corrections?

JBK: Mostly details. You may remember that the main body of the book is a Silly Symphony filmography. In most film books the filmography is a little appendix tacked on at the back, but we wanted to make this one as exhaustive and thorough as possible, documenting every bit of information we could find on production and exhibition of each film. That means lots and lots of detail, and as you know, an author can fuss endlessly over details. We've done a good deal more research since 2006, and were able to add new information, and fine-tune the information that was already there. In addition, Russell rewrote his part of the essay. And the design has been reworked by Tamara Khalaf, who did a tremendous job with it.

DG: Any surprises we should expect if we already own the first version of the book?

JBK: For me, it's tremendously exciting to see all the new information in the filmography. Animation credits on the early Symphonies, in particular, were very difficult to research the first time around. We've learned a lot since then, and we also had a lot of new assistance from the wonderful folks at the Walt Disney Archives and the Animation Research Library. Now we've been able to document those early titles much more thoroughly, and that information -- along with loads of other new material throughout the book -- can be preserved for posterity. Also, I mentioned that Russell rewrote his part of the essay. He's one of the most brilliant film historians in the world, and his part of the essay already featured some invaluable observations and insights, but now he's added even more. And Tamara's work with the design is brilliant in its own right. I always loved the original design by our friends at La Cineteca del Friuli, and now Tamara has enhanced it even further. And she's added a good deal of original production art and other graphic rarities. We were really fortunate to work with her.

DG: What are you most excited about when it comes to this new version of the book?

JBK: All of the above! I was always proud of the first edition, and now we've been able to polish it still further and "plus" it from beginning to end. Needless to say, I'm excited about that! I also love the fact that Disney Editions is getting behind it. Along with the chance to work with the great folks there, especially editors Wendy Lefkon and Laura Hopper, that gives us the advantage of Disney Editions' distribution network. I'm confident that the book will have a chance to reach a wider audience this time!

Looking forward to it :D