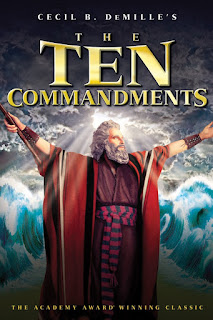 [I noticed this in an article on the TCM Website about DeMille’s ‘The Ten Commandments’! I had not seen this referenced before! Thought it might be of interest!

According to a May 1954 version of the screenplay, the look of the pillar of divine fire was suggested by the dcor paintings done by Pavel Tchelitchev for the Ballets Russes de Monte Carlo version of the ballet "Firebird." Studio records add that several of the animators who worked on the pillar of fire, the finger of God, the burning bush and other effects were borrowed from the Walt Disney Studios. The studio special effects report noted that the writing of the commandments on the tablets "was accomplished by animating three different drawings for each frame," and that nine shades of color were used for the pillar of fire.]

Any idea of who the Disney artists were?

Steven Hartley says: I recently found a article here on effects animator, George Rowley, and it appears he was an unc. animation supervisor on the special effects on the Cecil DeMille picture.

Todd Pierce says: The Ten Commandments work was done by Ed Parks and maybe others too.