This just in from Theme Park Press. Some of those books might be of interest to some of you:

FastPass times. Crowds. Meet and greets. That's what you think when you're at Walt Disney World. (And how much everything costs.) Next time, shoot higher. Packed in with all those souvenirs, leave the park with a philosophy, a guide to a better, Disney-driven life.

Former cast member Jeff Dixon draws upon his degrees in sociology and theology, coupled with a deep understanding of Disney history, to deliver a fun, engrossing mash-up of trivia-dense Disney stories and motivational life lessons, from Main Street to Fantasyland, and everywhere in between.

You'll be enriched by motivational magic from little-known Disney stories about:

- The importance of 18 seconds in the Enchanted Tiki Room, and how a lifetime of hard work can pay off in moments.

- Two Walts and a Wendy, and how mistakes can sometimes bring out the best in us.

- The hidden history of Ye Olde Christmas Shoppe in Liberty Square, and how the act of giving defines us.

- The perpetual motion of the Tomorrowland Transit Authority, and how it symbolizes Walt's admonition to never stand still. 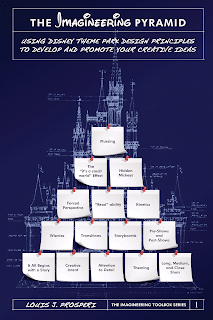 [Learn from the Disney Imagineers

Creativity. Innovation. Success. That's Disney Imagineering. It was the Imagineers who brought Walt Disney's dreams to life. Now *you* can tap into the principles of Imagineering to make *your* personal and professional dreams come true.

Even if you're not building a theme park, the Imagineering Pyramid can help you plan and achieve any creative goal. Lou Prosperi designed the pyramid from the essential building blocks of Disney Imagineering. He teaches you how to **apply** the pyramid to your next project, how to **execute** each step efficiently and creatively, and most important, how to **succeed**.

The Imagineering Pyramid is a revolutionary creative framework that *anyone* can use in their daily lives, whether at home or on the job. Prosperi shares with you:

- How to use "The Art of the Show" to stay focused on your mission.

- Practical tutorials for each of the fifteen building blocks that make up the pyramid.

- Imagineering beyond the berm: how to apply the pyramid to fields as diverse as game design and executive leadership.

- An "Imagineering Library" of books to further your studies.

UNLEASH YOUR CREATIVITY WITH THE DISNEY IMAGINEERS!] 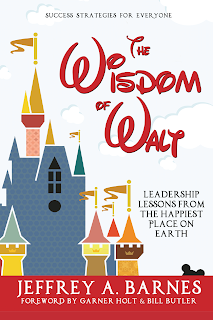 [Put Walt to Work for You

How do you go from dreaming of a theme park to building one? Walt Disney laid the blueprint. Learn how he did it, and how his wisdom can guide you toward achieving the things that *you* dream of.

The experts told Walt it'd never work. A giant theme park, where parents and children could play together? Crazy! So Walt put all of his money into this crazy dream of his. He put his reputation on the line. Anyone else would have quit, discouraged and disillusioned, but Walt built Disneyland. How did he go from dreaming to doing? And how can you do the same, no matter what your goal?

In *The Wisdom of Walt*, Professor Jeffrey Barnes distills Walt Disney's vision, his knowledge, and his methods into a series of actionable lessons. Through historical vignettes about Disneyland, as well as plentiful examples and exercises, Barnes creates a framework through which you can apply Walt's wisdom to improve your career, your company, and your life. Learn to:

- Listen to your "Walter ego" and start trusting yourself

- Go "beyond the berm" with the secrets of Disneyland's success

- Make a "Main Street impression" on everyone you meet

- Create "E-ticket experiences" that keep them coming back for more

WITH THE WISDOM OF WALT, YOUR SUCCESS IS JUST A DREAM AWAY!]
Posted by Didier Ghez at 12:02 AM