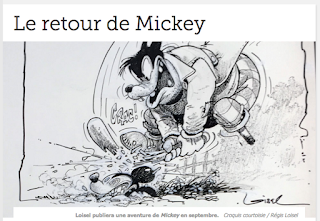 Garry Apgar just gave me a heads up about a new series of Mickey comic books which will be released this year in France and which seems utterly fascinating. One of the entries in the series will be written and drawn by none other than Loisel, a famous French comic book artist who created two classic graphic novels: La Quete de l'Oiseau du Temps and Peter Pan. He also served for a while as a concept artist at the Disney Studio in the 1990s. Can't wait.