I am actively working at the moment on research for They Drew As They Pleased - Volume 3. Once of the artists who will be featured in that upcoming volume is the astonishing Ecuadorian Eduardo Sola Franco, who worked at the Disney Studio for a few months in 1939, tackling chiefly on the abandoned Don Quixote project.

Sola Franco's complete illustrated diaries have just been released a few days ago in book form in Ecuador and while browsing through them yesterday I found quite a few drawings of his Disney colleagues, including the two below. The first one shows his friend and fellow concept artist Fini Rudiger. The second one features mostly members of Disney's Character Model Department: Martin Provensen, Fini Rudiger, James Bodrero, Art Heinemann (not a member of the Model Department) and sculptor Duke Russell. 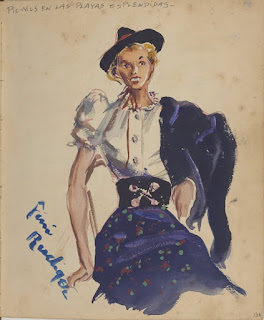 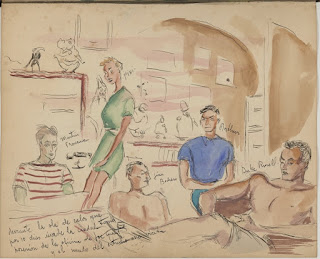