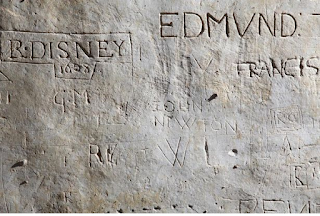 
[We all know about two kinsmen named “R. Disney” who played a vital role in Walt Disney’s life – big brother Roy and Uncle Robert, "the real dandy of the family," as Walt once called him. Turns out, per this report from the London tabloid The Mirror, another “R. Disney” left his mark in history, in Nottinghamshire, England, almost three hundred years before Walt was born:

It’s a small world after all, as the graffiti left on a Nottinghamshire wall by schoolchildren 400 years ago shows that Walt Disney’s ancestor was adding his mark.
The writing can be seen on walls at the Old Magnus Building in Newark ahead of work to create the National Civil War Centre on the site.
Originally a grammar school, the markings were found in the attic, formerly a dormitory.
The list of names include R Disney 1608 – believed to be an ancestor of animation legend Walt.
Disney’s family came from Norton Disney, in between Lincoln and Newark, he even visited the village in 1949.
Manager Michael Constantine told the BBC the graffiti was daubed on the walls by pupils at the school which was built in 1529.
He said: “We think school discipline would have been a bit more fierce back in the 1600s, so it was probably the thing the children did the day before they were due to leave.
“Probably like a tradition - just before they set sail.”
“We know some of the children were at this free grammar school because their fathers lent King Charles £1,000-plus and never got it repaid.
“Which is why, instead of being educated at home as members of the gentry, they attended a grammar school in Newark.”
The public are now able to see the graffiti in the £5.4m National Civil War Centre.]

That's a relative of Walt's but not an ancestor.
Richard Disney, one of ten offspring of Edward and Jane Disney, was born on Dec 12 1592, wed Mary Butree in 1697 (shortly after leaving school) and died childless in 1627. He is buried in Harmeston.