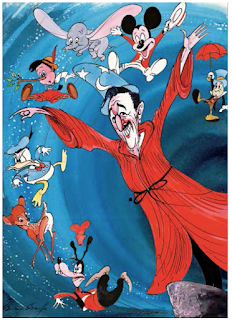 [Recently, BBC Radio 4 broadcast a 28-minute program, “Donald Duck Gets Drafted,” devoted to the wartime films made by the Walt Disney studio in the 1940s. The program was narrated by the great English cartoonist and self-avowed “life-long Disney fan,” Gerald Scarfe, whose drawing (above), published in the New Yorker in 2006, will appear in my book Mickey Mouse: Emblem of the American Spirit, due out next month from the Walt Disney Family Foundation Press.

Here’s how the BBC describes the show:

“Marking the 70th anniversary of the end of World War Two, illustrator and animator Gerald Scarfe tells the story of Disney’s fascinating on and off-screen contribution to the war effort. This documentary explores how the iconic Studio in California became a war plant in the 1940s, churning out groundbreaking military training films and propaganda shorts, educational posters and leaflets, along with insignias for troops to help boost morale on the frontline.

“Gerald, who worked as production designer on Disney’s 1997’s big screen animation Hercules, examines what motivated Walt to offer his artists’ inkwells as weapons of war. He uncovers why Donald Duck rather than Mickey Mouse became the Studio’s wartime mascot and reveals which film reportedly put Walt on Hitler’s own personal hit list. Plus he examines Walt Disney’s personal role as a Goodwill Ambassador in South America, intended to help stem potential Nazi influence.”

the link in your post to the BBC program got lost: http://www.bbc.co.uk/radio/player/b0680gts

The link is in the first line of the post. Just click on "Donald Duck Gets Drafted."