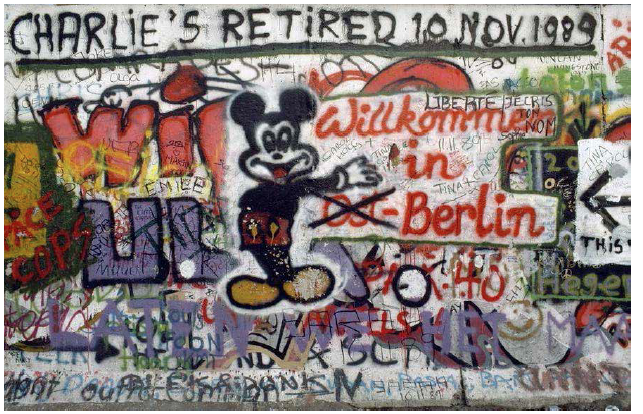 [This year marks the 25th anniversary of the fall of the Berlin Wall.

On November 10, 1989, one day after the Wall was first breached, a young American physicist, James Le, who was studying in Germany at the time, spray-painted Mickey Mouse on the barrier near Checkpoint Charlie, one of the most chilling symbols of the Cold War. The picture bore the caption, “Willkommen in Ost Berlin.”

The next day — by happy coincidence, the anniversary of Armistice Day, November 11th — something extraordinary happened in terms of the intersection of global politics and culture. With James Le’s Mickey looming over his shoulder, the Russian émigré Mstislav Rostropovich celebrated the historic occasion with an impromptu performance of Bach’s Suites for Cello, culminating in the solemn fourth movement or Sarabande from Suite No. 2.

Rostropovich must have delighted in the company of Walt Disney’s cheery exemplar of freedom. He could easily have repositioned his chair if he didn’t wish to be seated or be seen near that iconic emblem of America and the American spirit, Mickey Mouse.

Further proof of Rostropovich's affection for the United States came just three months later. In February 1990, the maestro was invited to conduct concerts in Moscow and Leningrad. As reported in the Washington Post, the program at the Moscow venue was “filled with sad music, including Shostakovich’s anguished Fifth Symphony, which was written at the height of the Stalinist purges in 1937.” For Rostropovich’s

"final encore, he chose an American classic, John Philip Sousa's rousing 'Stars and Stripes Forever,' the traditional finale of the National Symphony’s annual Fourth-of-July concert on the West Lawn of the Capitol in Washington. The Moscow audience responded with a standing ovation. Later, amidst bear hugs and vodka toasts at a post-concert reception at the U.S. Embassy, Rostropovich was asked why he’d picked the 'Stars and Stripes Forever.' The idea, he said, came 'from the heart.'"

Just as, one may suppose, the idea of combining Bach and the liberation of East Berlin with Mickey Mouse came from the heart.

Below is a photograph of Rostropovich at the Wall. For video of the performance, see: http://vimeo.com/35946240 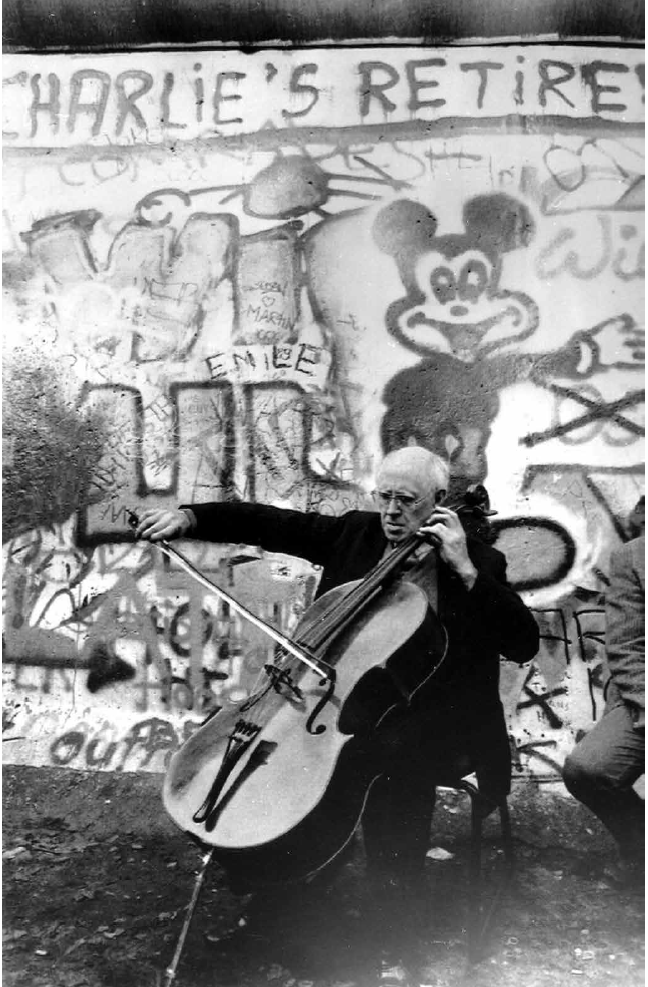