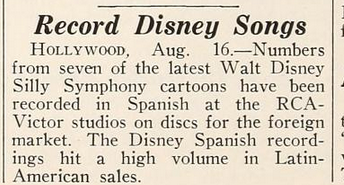 HOLLYWOOD, Aug. 16.—Numbers from seven of the latest Walt Disney Silly Symphony cartoons have been recorded in Spanish at the RCA-Victor studios on discs for the foreign market. The Disney Spanish recordings hit a high volume in Latin-American sales.]

This news item was accurate as far as it went, but these were not just "numbers from" the films; they were dubbed directly from the soundtracks of the Spanish versions of each title. In the US these records were released on the Bluebird label.

Very interesting. Thanks, JB! Of course, this new information (as always, where Disney is concerned) raises some additional questions:

(Presumably, the tunes on the Bluebird label released in the Estados Unidos were from the original soundtracks in English, right?)

And do we know when the practice of recording and selling discs of foreign-language versions of tunes from Disney short subjects began?

All these soundtracks were dubbed to disc in the latter part of July 1937. No, I'm talking about Spanish-language discs released in the US. Bluebird did also release records of most of these soundtracks in English, but these Spanish discs were a separate thing. There were a number of Disney-related records in other languages -- the specific thing you asked about -- before this, but these are the earliest such SOUNDTRACK records that I know of.