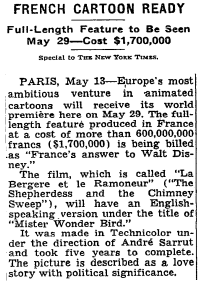 [With winter almost gone, at least in the colder North American climes, it's nice to turn our thoughts to spring and what the French call le joli mois de mai. As reported in the news squib above from May 1953 our Gallic friends were thinking big at that time, Disney-big, in terms of animation.