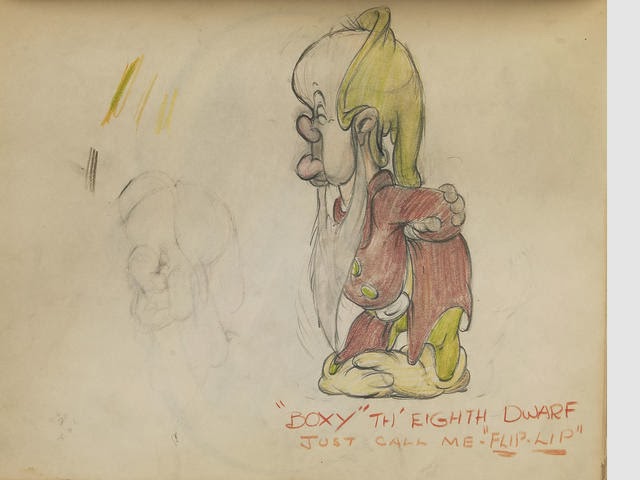 [Here's the 8th dwarf - Boxy - drawn by Riley Thom(p)son - and a caricature he made of himself.

Some years ago those two and a collection of other drawings were up for auction at Bonhams - but I don't think they were sold.

1930s, colored pencil on animation paper, bound in a vintage book, the collection includes a drawing of Mickey Mouse as the sorcerer's apprentice who wishes for a larger penis which is granted; a drawing of a wolf man inscribed OK Nick Nichols, OK Ford, OK Bob Leunin, OK Riley, OK Ward Kimball, OK Walt; bad boy Peter with Daisy; a penis with a face looking into the magic mirror; 12 drawings of a story of Jenny the hillbilly (whose face resembles Dopey); five drawings making reference to work; 15 drawings of self-portraits all with sexual references; 29 drawings of Glover and Doc Friendly, Glover has lost all limbs except for one who is obsessed with erected penises; 11 drawings of portraits, some very finished drawings; 7 drawings making references to Burk /Anthony with large penises; 6 drawings depicting Stanford students as penises; 20 miscellaneous drawings with erotic references.

Riley Thomson began his career in 1935 as an animator of Warner Bros. Merry Melodies. He began working for the Disney Studios in 1938 and animated some of Disney's Mickey shorts such as The Little Whirlwind, The Nifty Nineties and Mickey's Birthday Party. He was most famously known for animating Mickey Mouse as the Sorcerer Apprentice, for which he created a character that looked less like a rat and more like a cute mouse by exaggerating his features. In the early 1950s, he began drawing comics with Disney characters for Western Publishing. By the late 1950s, he took over the Brer Rabbit Sunday page from Dick Moores and continued doing that until 1959.] 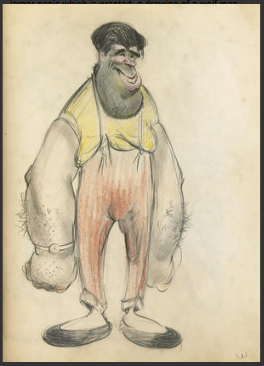 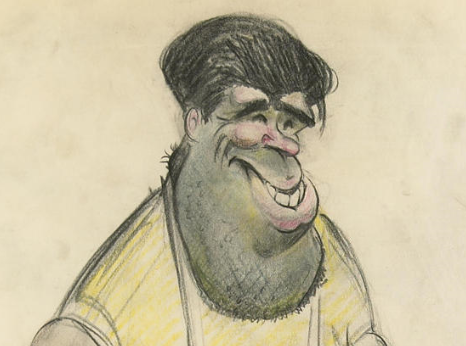