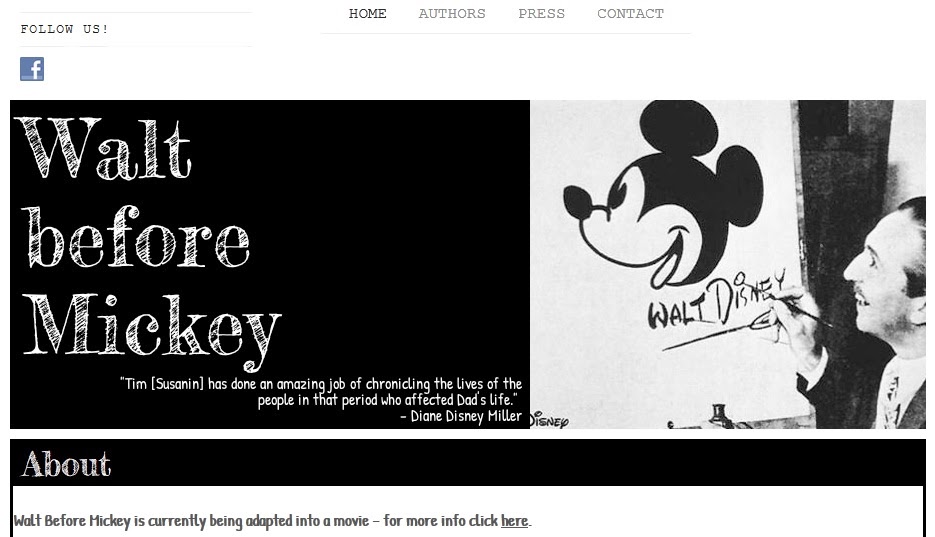 And so, apparently, there is not just one, but two movies in the making about the early days of Walt! Here is a link to the website of the second one.

Paul Perrello, who sent me the heads up, wrote the following article about the project:

["I only hope that we don't lose sight of one thing - that it was all started by a mouse."—Walt Disney

One thing that we are certainly not going to lose sight of in the weeks, months and year ahead is Walt Disney.  First up is Tom Hanks’ portrayal of the iconic showman in “Saving Mr. Banks” arriving in theaters this month.  Uncle Walt will continue to get the star treatment in 2014 with word that a major feature film is in the works.

Filming is scheduled to begin on “Walt Before Mickey,” a big screen flick about the life and times of a simple man with a big dream: Walt Disney.  Set in the 1900’s, the film is based on the 2011 book “Walt Before Mickey, Disney’s Early Years 1919-1928” by author and lawyer Tim Susanin.  The book by the suburban Philadelphia writer chronicled Walt’s early years and his rise to success. The foreword to Susanin’s book was written by the late Diane Disney Miller.

The movie version of Walt’s life before the Mouse is being produced by actor and Florida native Armando Gutierrez with filming commencing this month in the Sunshine State. Gutierrez says the movie will offer a “fresh take on a classic American ideal, exploring a part of Walt Disney’s life that little is known about.”

If the Disney movie holds true to Susanin’s book, audiences will get a chance to see a different side to the man who came into our living rooms each week on television to introduce “The Wonderful World of Disney.”  When promoting the release of his book in 2011 Susanin said “if you are looking to understand the creative mind, who was firing on so many cylinders in so many different ways through the 30’s and the 60’s, it is all right there in the first decade.”

For Susanin, a former federal prosecutor, Navy JAG and television legal commentator, his interest in Disney was the result of a family vacation to “the Happiest Place on Earth.”  The author says a 2003 trip to the Walt Disney World Resort with his wife and their three children was an eye-opening experience for him, one that he confesses he never saw coming.  He said at the conclusion of the trip he “couldn’t figure out what hit him,” but left Florida wanting to know more about Disney and as Susanin says “who was this guy who put this together?”

He picked up a biography of Walt and read it on the plane trip home, admitting that he just could not put the book down. He quickly realized that there was very little, detailed information about Walt’s return from World War One and what came next in Disney’s world. “There was no record so I wanted to learn more about that” he recounts.

“I guess it was a good break from the law. It turned out to be a great hobby,” Susanin concedes. “I really liked the guy a lot that I got to know in doing this.” Hopefully that experience will spill over to the movie version of the project.  Other producers signing onto the project include Jeff Rice, who was executive producer of “End Before Watch” and “Lone Survivor” and Christian Vogeler of “Silver Linings Playbook.” The movie will be directed by Ari Taub and could be released by the end of 2014.]