This just in from Garry Apgar:
[Diane, her dad, and “What Would Walt Do?”

Tomorrow, December 5th, will mark the 112th anniversary of the birth of Walt Disney. Two weeks from today, December 18th, the late Diane Disney Miller (and her many friends and admirers around the world) would have celebrated her 80th birthday.

Over the last two decades Diane’s great public passion was her dedication to preserving, researching, and promoting the achievements and legacy of the man she referred to quite simply as “dad.” Diane, her husband Ron Miller, their son Walter, and other members of the Miller family turned that passion into action in 1997 by establishing the non-profit Walt Disney Family Foundation, whose first major project was an interactive biography on CD-ROM called Walt Disney: An Intimate History of the Man and His Magic (1998). Three years later, the Foundation released a 90-minute documentary on VHS (Walt Miller, Executive Producer) entitled Walt: The Man Behind the Myth. (A 2012 version of the film on DVD is 2 hours long.)

After the release of The Man Behind the Myth, Diane and the Foundation embarked upon a far more ambitious and more complex project: the creation of The Walt Disney Family Museum, located on the grounds of the Presidio in San Francisco, overlooking — as seen from the grand picture window in the back of the museum — the Golden Gate Bridge.

The Walt Disney Family Museum, which opened on October 1, 2009, houses a fascinating and visually delightful array of art and artifacts, video, and other displays. In addition, under Diane’s leadership, the Museum initiated a program of exhibitions, the high point of which so far has been Snow White and the Seven Dwarfs: The Creation of a Classic, curated by Lella Smith, Creative Director of the Walt Disney Animation Research Library in Glendale. The Snow White show ran from mid-November 2012 through mid-April 2013 and traveled in June to the Norman Rockwell Museum in Stockbridge, Mass.

In tandem with the creation of the Museum, the Walt Disney Family Foundation launched The Walt Disney Family Foundation Press, which published two Snow White books in 2012. The first of these, an oversize 320-page volume, The Fairest One of All, is a definitive history of the film. A smaller, 256-page book, Snow White: The Art and Creation of Walt Disney's Classic Animated Film, was designed to serve as a “catalogue” or companion publication to the show curated by Lella Smith. Each of these handsomely produced books was written by the distinguished film and Disney historian, J. B. Kaufman, who is now working on a book for the Press on the making of Pinocchio, originally intended to serve as the companion volume to a second major exhibition, devoted to Walt’s second feature-length cartoon masterpiece, and planned for 2014 at the Disney Family Museum, but which for the time being has been taken off the schedule.

There have been a number of eloquent and heart-felt tributes to Diane since her death on November 19th, most notably, I think, those written by Leonard Maltin, Andreas Deja, and Charles Solomon.

Today, however, to celebrate the memory of both Walt and Diane, I believe it might be nice to take a more light-hearted approach and reproduce the two images below. These images address, ironically (though that was not the intent, I’m sure, of their makers), the question that ever since Walt’s passing in 1966 seems to surface whenever a particular problem would arise at the Disney studio, or whenever the future of the studio itself appears to be at risk: “What Would Walt Do?” 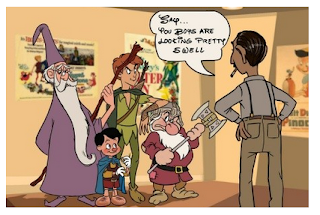 The first image, posted online on March 23, 2009 by “Juanma”, is a spoof on the idea of what a Disney treatment of Lord of the Rings would be like. The second drawing is by the great caricaturist Robert Grossman, published around 1996 when the Disney version of The Hunchback of Notre Dame came out. Diane Miller loved Bob Grossman’s work. I don’t think she ever saw this particular image, but I am pretty sure she would get a chuckle out of it. 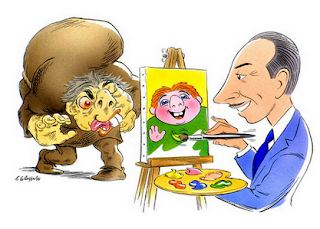 “What Would Walt Do?” ... Now that Diane is gone, anyone concerned about cultivating Walt’s legacy is entitled to ask, ”What Would Diane Do?” The answer is clearly two-fold. Remain curious about all things Disney, and keep fighting the good fight to get the word out about everything her dad did and the kind of man he really was.

Walt Disney was not just a genius and a visionary. He was a good man, a good husband and father, and an inspiring leader whose accomplishments were the result of hard work and perseverance as well as innate artistic talent. Walt Disney was, as I like to say, the tent-pole of modern American popular culture. And because popular culture is American culture, Walt’s impact on our lives has been more profound, and will be longer lasting, than that of any other artist, writer, or film-maker in our history.

Terrific contribution from Garry although he modestly fails to mention that his long anticipated book about Mickey Mouse will be released by DFF this Spring.

I think he is absolutely correct on how Diane would like to be remembered by the rest of us to get the true stories of Walt out there and preserved for future generations.