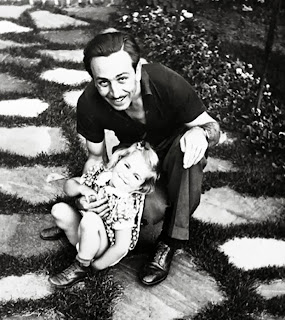 It took me a month to accept the fact that Diane Disney Miller is gone.

As explained yesterday in the introduction of Disney's Grand Tour, the whole project began thanks to a question I received two and half years ago from Diane. Michael Barrier had been kind enough to introduce me to her by email in 2007, which led to a face to face meeting in New York a few months later. I had presented to Diane a project linked to Disney history preservation and told her that I would be in New York for a short vacation which might give us an opportunity to meet via video-conference. In what I later came to realise was Diane's typical enthusiasm she stunned me a few days before the trip by telling me that she had decided to fly from San Francisco to discuss the project face to face with me in New York. I had the pleasure to meet her on two ulterior occasions, both times in California, once a year before the inauguration of the Museum and once the day of the inauguration. Each time she struck Rita (my wife) and I as a bundle of energy and enthusiasm sharing candidly with us her passion for the Museum, her enthusiasm for new Disney-related projects, her frustrations with whatever was in the way and her millions of ideas. To say that she was full of life is the understatement of the century. She loved her parents, she enjoyed those who really cared, and she was immensly generous with her time and her memories.

She became for a few years the bearer of the flame when it came to preserving Disney History. The burden is back on our shoulders. It is only justice.

A beautiful and moving tribute Didier. I still get upset thinking about what happened and how her life came to a tragic and abrupt end. She deserved better. I remember when she called me and said she wanted me to come down to San Francisco to meet with you and Don Peri. She said it was important the three of us meet face-to-face because we all shared the passion of researching and writing about her father's legacy. I was, quite frankly, surprised by that call but I learned rather quickly that if Diane had an idea or if she bought into an idea or proposal, she would and could move heaven and earth to bring the idea to fruition. I am sure she would have been thrilled with your book.

What a great photo of Walt and Diane.

A very moving tribute indeed. As long as there are fans like us who admire the life and work of Walt Disney he and his daughter will never be forgotten. Diane will live in our memories.