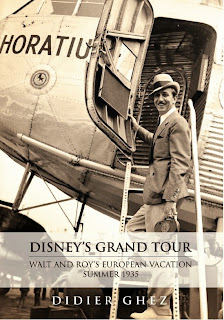 Disney's Grand Tour is now available for pre-order on Amazon and should start shipping later this week. The Kindle version should also be released in a few days. In the meantime I wanted to share some information about the book.

You have probably already guessed this by now, but I am extremely proud of this book. I consider it as my most important contribution to Disney History to date. It is a small hardcover book (6' x 9' - 162 pages) but every single page is full of new information about Walt's trip and about the early history of Disney in Europe. In fact I would say that about 80% of the text shares brand new information. Many of the photos had also never-been-released in a book before today. And the 215 endnotes, if you take time to read them carefully, will take you to another dimension of knowledge alltogether. The book will be priced at $35, due to its high production costs.(The Kindle version will cost $9.99.)

To say that I am passionate about this book is an understatement. It is THE Disney history book I had wanted to write all my life.

Here is what Paul F. Anderson, John Canemaker, J.B. Kaufman and Jim Korkis had to say about Disney's Grand Tour:

[I am proud to say that I was present for the genesis of this magnificent book. Some years back I asked Didier to write a guest essay for the Disney History Institute. Didier and I had talked about possible subjects, and he decided that Walt’s 1935 trip (the Grand Tour) would be perfect; moreover, it was something we had discussed before and he was extremely passionate about it. If you know Didier (and I am proud to say he has been a dear friend for over twenty years) you know that when he encounters a story about which he is eager, enthusiastic, and emotional he will leave no stone unturned to find absolutely every historical fact available on this planet! With this desire to “find it all” burning in him, this essay, as I suspected, turned into a book—his magnum opus, a true genius work of Disney history. Never before in our field of studying Walt, has something been so brilliantly researched, expertly stitched together, and lovingly written! This work is an amazing testament to who Didier Ghez is and to the dedication he has to Walt Disney’s legacy. It is for this reason that I believe that this is the first of many amazing works from Didier, that prove what I have always known—he is the historian that will set the standard for Disney history and research for the next twenty-five years. If you want to see what that future will be like, then you start with this book. You won’t be sorry!

Didier Ghez's amazing new book on the grand European tour of Walt and Roy Disney and their wives in the summer of 1935 is so meticulously researched and written in such vivid detail that the reader will swear they were actually there, too!  The way the Disneys traveled, the celebrities they met, their intimate reactions to places, people and events is recreated in prose that is as illuminating as it is entertaining. The impact of the trip affected in a positive way future Disney movies, artists hired at his studio and designs for the theme parks.  This is a major scholarly addition to our knowledge of Walt Disney during one of the most crucial periods of his career.

It’s no secret that Walt and Roy Disney and their wives visited Europe in 1935, but most of us haven’t known much about the trip. Now, thanks to Didier Ghez, we have a definitive account, and it’s a fascinating story. This was more than a vacation; here the Disneys engaged with European cultures in ways that would have a lasting impact. Didier’s passion for Disney history is well known, and here he combines it with his own European background, and a wealth of meticulous research, to bring this story to vivid life. We all owe him a debt of gratitude for this book.

Disney historian Didier Ghez is a persistent, patient and passionate researcher who has uncovered the real story of Walt's 1935 European trip.   Using first-hand accounts, this outstanding book allows Disney fans to accompany Walt and Roy on an always fascinating moment-by-moment visit to England, France, Germany and Italy. Even after decades of research, I learned something new on every page of this incredible story.

Come back tomorrow to read the Introduction, which explains why the book is so special in my mind and shares some of what it took to research it and to write it.

Congratulations, Didier. I look forward to reading your book and learning about this unreported time in Walt and Roy's lives.

Congratulation to this book. It looks awesome and I can not wait to read it. Great work !

Awesome news... Can't wait to purchase and read it. But unfortunately it isn't listed on the German Amazon website :( Perhaps they will list it in a few days so that will be able to preorder the book... I hope they will