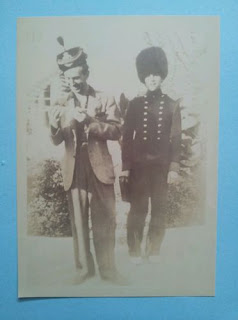 Todd Pierce and I just picked up this great photo on ebay. I have to admit that it threw me off. Walt is wearing a French grenadier's "shako" and the young man on his right seems to be wearing either the uniform of Napoleon's French grenadiers or, more likely, the uniform of the Italian Granateri di Sardegna (basically some Italian grenadiers). So I thought Walt might have been in a fun fair or in Europe.

In reality, both Becky Cline and David Lesjak confirmed that this photo was taken during an RKO convention which took place at the Studio in 1936.

You might remember you posted more photos which I have from this back in 2007. So I was bidding against you, I was going to go very high but changed my mind. Also, I recently had someone contact me regarding the man in the uniform, I'll get back to you with his name.

Mark: Apologies about this. Todd and I will send you a high res version of the photo and will contact you next time we bid on a photo of Walt!!