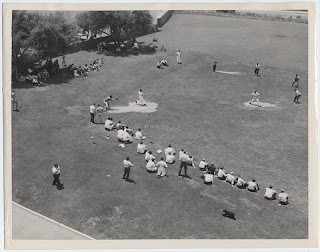 Fun photo being sold at the moment by Howard Lowery:

[This is an original Walt Disney Productions black-and-white glossy photograph of an afternoon baseball (or softball) game played by men of the Disney Studio on a nearby lot in 1935. The picture was taken at the studio located on Hyperion Avenue in Hollywood before the move to Burbank in 1940, likely from the roof of a building; one of the men seated at lower right has turned to look up toward the camera, and his features are discernible.

Pasted to the back is a typed carbon WDP publicity caption that reads: "95-38: The national game of America, baseball, comes in for its full share of attention every day on the Disney lot, as its male artists exchange their pencils and drawing boards for bats and gloves." The pitcher has thrown the ball under-handed (indicating softball?), and the batter has swung and missed. This is an original Disney photograph; it is not a reprint or computer-generated print.]

This photo is actually from September 1935. Members of my Hyperion research team identified the image as being taken at the new Burbank Studio, on a piece of land that the Roy O. Disney building would eventually be built on. Howard was going to pull the image and relist it with the proper information. The negative number included on the reverse of the image gives one major clue: "95-1938." The "95" is the month and year the photo was taken, ergo, September, 1945, while the reference to "1938" is not the year, but a negative reference number. I personally learned this many years ago when seeing some of the insignia images at the Company Archives - Dave Smith explained the photo reference number to me back in the late 1980s.