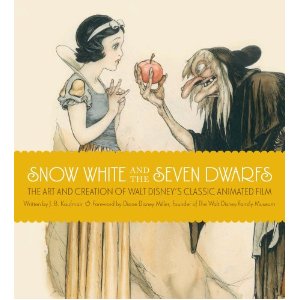 As promised yesterday, here is another interview with JB, about Snow White and the Seven Dwarfs: The Art and Creation of Walt Disney's Classic Animated Film. Enjoy!

DG: Are there a lot of visual documents in the catalog which do not appear in the “main book”?
JBK: Yes, because that is the main function of the catalog: to serve as a guide to our comprehensive Snow White exhibition at the Walt Disney Family Museum. I’m proud of the illustrations in The Fairest One of All, and there are a lot of them, but their purpose really is to illustrate the text. The catalog is the other way around: it’s organized around the images, and then the images are supplemented by the text.

DG: What will be the main surprises for Disney enthusiasts?
JBK: Mainly, I think, just the tremendous variety and beauty of the artwork generated during production of the film. We’ve all seen a fair sampling of Snow White production art, reproduced in various books and articles, but the visual riches of this film aren’t exhausted yet—not by a long stretch. This exhibition encompasses an amazing wealth of production art, from concept art and model sheets through story sketches, layout drawings, background paintings, and cleanup animation drawings as well as the finished cel setups seen in the film. The art is drawn from the collections of both the Walt Disney Family Foundation and the Walt Disney Animation Research Library, and includes dozens of pieces that I don’t think have been seen before. For anyone who is able to come to the Museum in person while the exhibition is running, I highly recommend it! But the catalog is designed to reflect all that, and it’s a feast for the eyes in its own right.

DG: Why release two books about Snow White at the same time?
JBK: It wasn’t originally planned that way. When we decided to do The Fairest One of All, it was just because it needed to be done, and we weren’t thinking in terms of the timing. But then it turned out that the publishing timetable coincided neatly with the 75th anniversary of the film, and that led to the idea of a special Museum exhibition to mark the occasion, and that led to the idea of a separate book that would serve as a catalog for the exhibition. And the next thing we knew, we had two Snow White books in the works at the same time.

DG: What are the main chapters in that second book?
JBK: There are twelve chapters altogether. The first chapter introduces the early stages of Snow White story development in the mid-1930s and illustrates the production process the studio used at that time; the last chapter is about the success of the finished film and the recognition it received around the world. The other ten chapters, in between, follow the design logic of the exhibition, which in turn follows the continuity of the film itself. In effect, you walk through Snow White’s story, from beginning to end, by way of this extraordinary collection of art that brought it to life on the screen.

DG: Are there some pieces of information in the second book, which do not appear in the first one?
JBK: Yes, actually there are. The basic historical account of the film doesn’t have the depth or detail of that in The Fairest One of All, but I’m proud to say the exhibition includes a number of drawings and paintings that were used for highly specialized effects in making the film. And for each of those pieces we were able to put in little explanatory paragraphs to demonstrate how they were used in production. So the end result, in this book, is that we have kind of a general overview of the film’s history (I call it “Snow White lite”), punctuated with individual closeups of these fascinating little details. I’m really happy that we were able to give these two books separate identities, with exclusive features and qualities of their own.