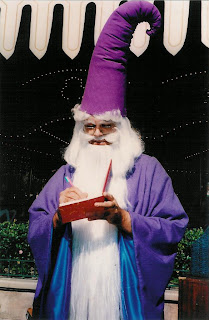 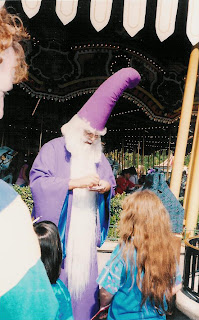 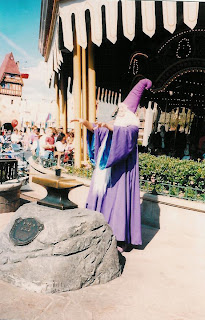 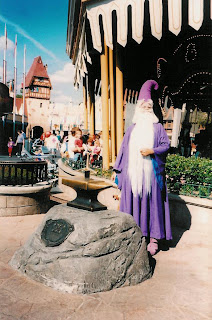 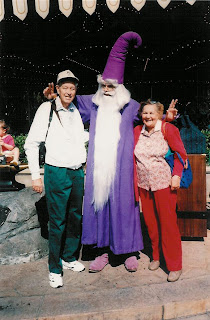 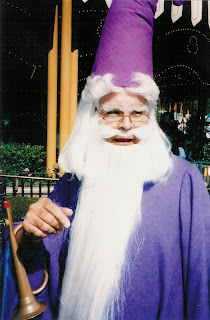 “Walt [Disney] never knew that I patterned Merlin the magician (in the animated feature Sword in the Stone) after him when I wrote the script," remembered Disney storyman Bill Peet.

At Walt Disney World’s Magic Kingdom, in front of Cinderella Carousel, from 1993-2006, Merlin came to life to perform the “Sword in the Stone Ceremony” several times a day where he sought out a new temporary royal ruler of Fantasyland while good King Arthur took a brief vacation.   An adult was unable to draw the mighty sword from the anvil but up to six times a day, a young child with a little magic from Merlin always accomplished the feat.

Since Merlin is a real person and there is only one Merlin, a Disney entertainment performer is not Merlin but might be a “friend of” Merlin or “assist in the portrayal of” Merlin.  Over the years, Merlin has had many friends at Disneyland, Walt Disney World, Disneyland Paris and Hong Kong Disneyland.

I had just completed performing as a “friend” of Prospector Pat in Frontierland as Summer ended and in September 1995, I found myself “assisting in the portrayal” of Merlin several days a week.   In early 1996, I became part of the Opening Team for the Disney Institute as a salaried animation instructor and bid a sad farewell to my old friend.

In the Fall of 1995, my parents visited me several times and took photos and video of the performance.  I even arranged for my dad (who passed away a few years ago) to actually pull out the sword and receive the special medallion and certificate that he displayed proudly over his desk at home for many years.

I haven’t seen a lot of photos of Merlin so here are a few that mom and dad took, except for the one that has both of them standing next to their son and wondering why they paid all that money for a good college education for him.