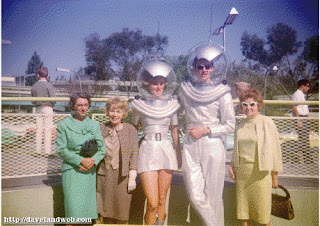 [Disney Historian Jim Korkis thanks to some help from Matt Crandall has interviewed the final Space Girl who appeared in Tomorrowland in 1964-1965 for a future edition of Walt's People.
Here is a photo of Carol with her Space Man companion, Pete.  Both Carol and Pete were over six feet tall and wore heels as well so they towered over the guests.]
Posted by Didier Ghez at 12:02 AM