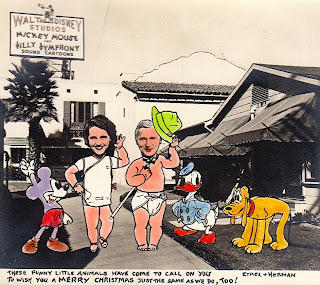 Astonishing item discovered recently on ebay by Mark Sonntag. According to the caption:

[This is an extremely rare original 1938 homemade Christmas Card from Herman and Ethel Schultheis, done as a photo montage or collage from a photograph taken outside the Walt Disney Studios (with the signage showing the Mickey Mouse statue logo and Silly Symphony Sound Cartoons), with colored in photo drawings of Herman and Ethel posing alongside Disney characters Mickey, Donald Duck, and Pluto in the foreground. The noted animator and camera effects artist Schultheis, who was instrumental in creating the effects on Fantasia, Dumbo, Pinocchio and other classic animated works, is depicted in whimsical fashion here, wearing a diaper and sporting a stetson and cane for added style.]
Posted by Didier Ghez at 12:02 AM

And I look forward to it showing up at my house.

The Schultheis book is my favorite thing at the Family Museum.