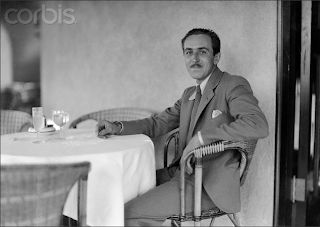 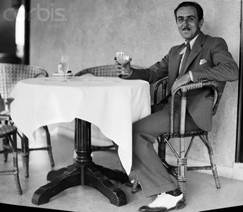 Garry Apgar was kind enough to write the essay below for the Disney History blog.

According to the digital image licensing company Corbis, the photo on the left shows “Walt Disney, clever originator of the world-famous Mickey Mouse animated cartoons and newspaper comic strip, on the terrace of his hotel during a two-week holiday in Havana." Like the image to the right, in which Walt looks especially relaxed, it is dated by Corbis October 30, 1931. Michael Barrier has a print of the latter photo “marked as published in the Philadelphia Inquirer on October 31,” with “a wire-service caption dating it as from October 30, 1931.”

In Havana, Walt and Lillian Disney stayed at the posh Hotel Nacional de Cuba, designed by the prestigious architectural firm of McKim, Mead and White (the hotel had opened just nine months earlier, on Dec. 30, 1930). The Disneys’ sojourn in Cuba was the principal stop on what the Los Angeles Times (Nov. 12, 1931) described as “a five-weeks tour,” … Walt’s “first vacation in four years.” The itinerary was hastily cobbled together after, as Walt later remarked, he'd suffered "a hell of a breakdown," caused by stress running the studio. It would be the couple’s longest and most exciting vacation prior to their “grand tour” of Europe (London, Paris, Rome, etc.) with Roy and Edna Disney, in the summer of 1935.

En route to Cuba, the Times reported, Walt and Lillian visited “the Grand Canyon; Kansas City, [Walt’s] old home; Washington, D. C.; Miami and other Florida resorts.” On October 15th they arrived by train in Kansas City where Disney had been invited to receive a Legion of Honor award from the Order of DeMolay. It was the first time he’d been back since he’d taken off to try his luck in Hollywood in 1923.

In a story published in the Kansas City Times on October 16, Walt and Lillian called their vacation a “gypsy jaunt,” taken on doctor’s orders. Lilly said, “It’s great fun just to start out, without knowing in advance exactly all of the places you’re going to see.” (See http://www.michaelbarrier.com/Commentary/Gabler/GablerErrata.htm for Michael Barrier’s critique regarding pp. 166-167 in Neal Gabler’s biography of Disney; and Brian Burnes, et al., Walt Disney’s Missouri: The Roots of a Creative Genius, 159-160).

A photo (below), from Walt Disney’s Missouri, first published in the Kansas City Star, shows Walt and Lilly being met at Union Station in Kansas City by DeMolay founder Frank S. Land. 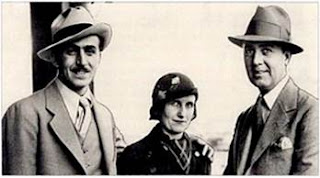 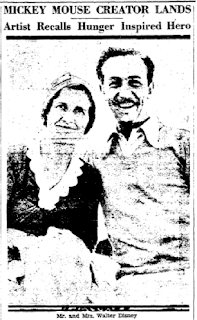 Three years ago, David Lesjak (http://vintagedisneymemorabilia.blogspot.com/2009/02/on-vacationin-cuba.html) reported on his website Vintage Disney Collectibles that Gunnar Andreassen "located and shared with me the manifest for the SS California, the luxury cruise ship Walt and Lillian sailed on from Cuba to Los Angeles. The manifest, which lists Walt and Lillian as passengers, indicates California departed Havana on November 3, 1931 and arrived in the Port of Los Angeles on November 14th."  The next day, the Los Angeles Times published a shot of the couple (above right) taken when the ship docked in L.A. 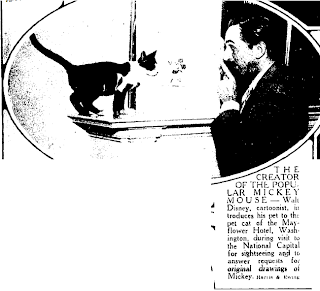 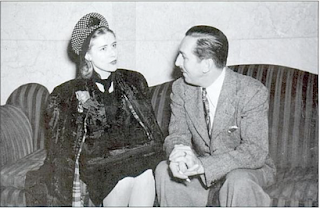 Also on November 15, 1931, the Hartford Courant printed a standalone photo above (left), furnished by the renowned Washington, D. C. photographic studio, Harris & Ewing. It was taken during the second major stop on Walt and Lilly's epic “jaunt,” at the Mayflower Hotel in the nation's capital. Based on Pete Martin's taped interviews with Walt from 1956, Gabler said that Walt and Lillian stayed at the Mayflower for three days, then "trained to Key West and caught their tug to Havana, where they spent the next week." If the Disneys did spend only one week (perhaps ten days, but not, as seems likely, a full two weeks) in Cuba, the Mayflower Hotel photo probably dates from around October 20th or so. The Mayflower, incidentally, appears to have been Walt’s hotel of choice in Washington. Above (right) he was photographed in 1943 discussing his movie, Victory Through Air Power, with Clare Booth Luce, seated in the lobby of the hotel (McClinsey, Washington D.C.’s Mayflower Hotel, 2007, 54).

As Bob Thomas reported in his 1976 biography of Walt, while in Washington the Disneys visited such must-see sites as the Washington Monument, Lincoln Memorial and the Capitol, along with nearby Mount Vernon. Walt seems to have had but one disappointment during his time in D. C. After checking in at the Mayflower.

the [hotel's] publicity man ... asked if he could make any arrangements. "Yes, I'd like to meet General Pershing," Walt replied. "When I was driving a canteen car in France, I drove his son, and heard the general give his farewell speech in Paris on the back of a truck. He was my hero, and I'd sure like to meet him."
"Well, that's pretty hard to arrange," the publicity man said. "Would you like to see President Hoover instead?"
"No, the President's too busy," Walt replied, "and I wouldn't know what to talk to him about. An appointment proved impossible, but Pershing sent an autographed copy of his memoirs. ....

In 1932 Pershing was awarded the Pulitzer Prize for history for the two-volume memoirs, My Experiences in the World War. (The copy given to Walt, inscribed, not merely autographed, is now at the Walt Disney Family Museum.)

Over the years, Disney came into personal contact with three future U. S. presidents: his good friend Ronald Reagan, Richard Nixon, who took his family to Disneyland at least twice in the ’50s, and, in 1946, Dwight D. Eisenhower (Ike and Walt crossed paths at least one other time, in 1964 at the Republican National Convention in San Francisco). LBJ was the only sitting president he came face to face with. Franklin D. Roosevelt was widely proclaimed to be a fan, but Walt and FDR never met—though Eleanor Roosevelt visited the Burbank studio in late April 1941. In 1957 Harry Truman toured Disneyland. However, perhaps because he was a staunch Republican by then, Walt was not on hand to greet the former president. (In 1961, after he’d left the presidency, Ike brought his entire family, including their four grandchildren, to the park, but Walt was absent on that occasion as well.)

General Pershing was alive until 1948, but despite Walt's great admiration for him, they never met. This must have been all the more disappointing in that Pershing was born and raised in Laclede, Missouri, a mere 17 miles from Marceline, where the future father of Mickey Mouse spent the happiest of his boyhood years. It is, therefore, a happy coincidence that the Walt Disney Family Museum is housed in a former Army barracks facing the parade ground of the Presidio in San Francisco, where Walt’s hero served for several months in 1914 as commander of the Presidio, prior to being assigned to Texas to lead the 8th Cavalry in pursuit of the fabled Mexican revolutionary Pancho Villa.

In August 1915, Pershing's wife and three young daughters perished in a fire in their home, located just north of what is now Pershing Square at the Presidio, not far from the Disney Museum. Only the couple’s six-year-old son, Francis Warren Pershing, survived the conflagration. A flagpole now marks the spot where the house once stood. 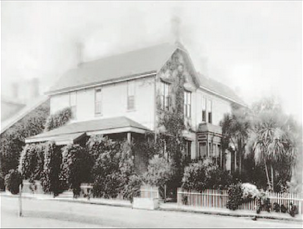 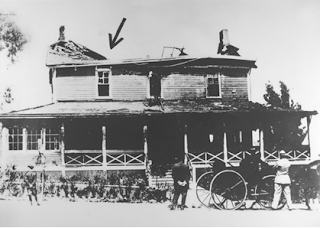 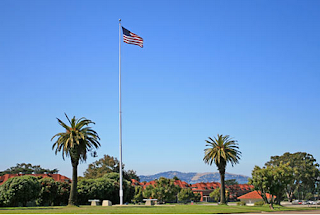 middle: The arrow points to the window through which young Warren Pershing was rescued (National Park Service photo).

This was the same ten-year-old boy that "Driver Disney" (as he was identified in his official orders) and Walt's beloved Red Cross "boss," H. Alice Howell, took on a day trip and picnic in April 1919 to Domrémy, birthplace of Joan of Arc. Alice, Walt and young Warren may have made the excursion in a Red Cross vehicle like the one on display at the Disney Family Museum.

In an article published in the Lincoln Sunday Journal, May 13, 1934, Alice Howell said that she had known Pershing "intimately" during his stint at the University of Nebraska as a military instructor from 1892-1895. (Howell was head of the dramatic arts department at the university at the time.) She also revealed that she saw Pershing "innumerable times in France." Walt, it appears, got to see him just once, "from the back of a truck," as he later said. Presumably, Walt's recollection refers to Pershing’s ceremonial review, as commander of the American Expeditionary Forces, on July 19, 1919, in the Bois de Vincennes, of a special “Composite Battalion” that, just days before, had represented the AEF in Paris’s Bastille Day parade and the Empire Day victory parade in London.

For a transcription of the 1934 article on Howell, posted at Vintage Disney Collectibles, see: http://vintagedisneymemorabilia.blogspot.com/2009/04/walt-disney-and-red-cross-part-4.html.

At the same site are posted the two images below: 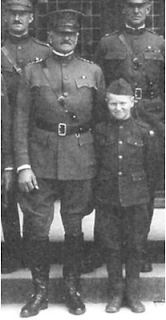 above: Cartoon by an unknown staff artist of Alice Howell and Walt Disney in the Lincoln Sunday Journal, May 13, 1934.