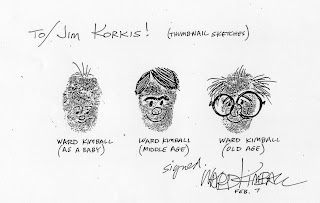 The first one that is a thumbnail illustration of the life of Ward Kimball was done by Ward as a gift for me in the Eighties.

The second one is an illustration that Ward did when he attended the Disney Institute at Walt Disney World in April 1996. As an animation instructor, I helped prepare a large sketchbook (about three foot by three foot) and invited visiting lecturers to draw a sketch or sign their name. The book was filled with artwork by Marc and Alice Davis, John Culhane, John Canemaker, a NEW YORKER cartoonist, actors, and many, many others. When Disney laid off half of the animation staff and then shortly after that, other people had access to the animation studios, some things went "missing". Shortly before the physical location closed, someone had taken a razor blade and cut out pages from the book that used to be under lock and key. Fortunately, I took photos of some of the artwork and this is my photo of the page that Kimball did that is now missing. So beware if you ever see it or Marc's self portrait or Alice's sketch of an Eskimo girl from SMALL WORLD for sale among others. I sat there and saw Ward draw it in the backstage green room at the Cinema about a half hour before he was to go on stage and be interviewed. Yes, the light was absolutely terrible (hence, Ward's remark about drawing in "candlelight"), the space was cramped without a table so he balanced it on the sofa, and yes, he hated the result....which I think is pretty wonderful.] 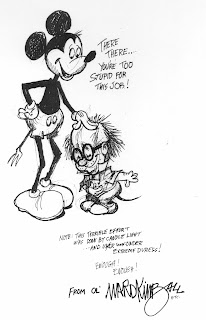 Here are my Kimball Karicatures!