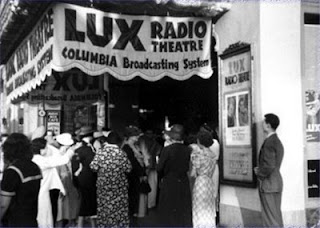 This just in from Robert Lughai (who runs the great blog Filmic Light: A Snow White Sanctum) via Jim Korkis:

[I am currently doing research for a post on the December 26, 1938 Lux Radio Theater presentation of Snow White.

In particular, I am trying to confirm the actual voice actors who reprised their roles from the film. While I'm able to identify a number of them from the audio recording, others are just different enough that it's difficult to be sure.

Unfortunately, I haven't been able to find much info. Most of the material I've found so far states that "many" of the actors returned, but just who is not specified.

Would you have info on this performance that Walt Disney appeared in? And specifically, do you know if the main characters were played by the original actors?]

[What a great question!

Here is the information I have in my files. I don't know if I would say "many" of the original voice actors returned. I would probably say "some". I can't guarantee it is a hundred percent correct but I haven't seen any other refutation of this information:

Folks like Lou Merrill who did Sleepy were "utility performers" filling in a variety of odd little side voices for a show. He did a lot of this work for LUX RADIO THEATER in the early years.

I wish I knew more about Thelma who I would call "The Forgotten Snow White". Why was she brought in to do Snow White's voice rather than Adrianna Caselotti who did it in the movie? I assume it is because Thelma had more experience on radio and more experience doing Snow White's voice. For one thing, she did the Spanish dub of Snow White's voice for the original theatrical release. For another, on the MICKEY MOUSE THEATER OF THE AIR radio show earlier in 1938, she not only supplied the voice of Minnie Mouse (and would do the voice for a handful of theatrical shorts in the early Forties) but also did Snow White (in English) for two of the shows.]

Can anyone else help?
Posted by Didier Ghez at 1:24 AM

This type of information is very astonishing... On one side, this very old radio presentation on the other lot of "files" keep by some Disney fans...

Could it be possibly because Caselotti was suing the Disney Company over the unauthorized use of her voice?

Caselotti and Harry Stockwell, the voice of the Prince, launched legal action against Disney shortly after the film opened. I recall it may have been over the use of their voices outside of the film, (for example, on the RCA children's record).

I'll try and go through my newspaper clippings this weekend, because I know there was press coverage regarding this at the time.

Jim Korkis's always terrific research covers the bases for the /Snow White/ show and I thought I'd offer the following as a small supplement for anyone interested in further information about "Lux Presents."