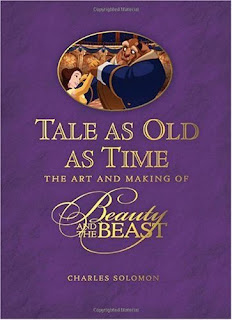 Let's admit it: rarely have I seen so many excellent books about Disney history released or about to be released at the same time. The fourth book I got from Disney Editions last week is clearly the outstanding one in the lot. Charles Solomon's Tales As Old As Time (The Art of Beauty and the Beast) is clearly a "must have" if you care about the "New Golden Age" of Disney animation, and even if you already have the 1991 version of Bob Thomas' Disney's Art of Animation.

Charles has conducted various new interviews for this book, and, as ever, his text is beautifully written. In fact, as in his best book (The Disney that Never Was) Charles let's the artists themselves tell their stories which makes reading the book even more compelling.

What makes the book truly outstanding, though, is the quality of the artwork selected. The first 50 pages are of particular interest as they cover the genesis of the project and therefore the abandoned version of the movie, when it was supposed to be directed by the Dick and Jill Purdum.

"We were going to use a British director because, you know, Dick Purdum was very close to Richard Williams. When Dick Purdum worked for Dick he was one of the strongest artists of the Richard Williams crew. Dick’s wife Jill Thomas was an excellent production executive who came from an old British cinema family. Her brother Kevin Thomas produced all the Richard Attenborough epics like Gandhi. The Purdum Animation Company was a very prosperous commercial studio creating TV adverts for the European market."

And not only do we discover beautiful artwork by Hans Bacher and others for this abandoned version of the movie, we also have the pleasure of discovering no less than 7 concept paintings by Mel Shaw created for the project around the same time.

If this were not enough, since Charles mentions briefly the projects that preceeded Beauty and the Beast, he also offers us no less than 6 never-seen-before paintings by Mel Shaw created for The Black Cauldron.

If you have seen those, you already know that they were the best thing that even came out of that project and you can appreciate how much of a treat Charles is giving us.

In summary: A book that I am proud to own and that I will check often with tremendous pleasure.

Ah, and if only Charles could write The Disney That Never Was Number 2 (message to Charles: "hint, hint" :-)
Posted by Didier Ghez at 10:46 PM

Did you also receive The Disney Sketchbook? It was supposed to be released August 17 but seems to have been delayed.

Unfortunately The Disney Sketchbook has been delayed until 2011.

Thanks for the information. I was really looking forward to that one.

Where is the difference between the versions of 1991 and 1992 of "Disney's Art of Animation #1: From Mickey Mouse, To Beauty and the Beast"? is it really that good? I imagine it to be similar to the art of walt disney??