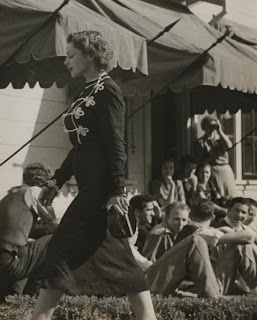 Regarding the above photo taken at Hyperion.

The people watching are on the steps and lawn outside the front door of the bungalow, which was added to the property in late 1932.

The bungalow had been home to various departments including: Publicity: Story: and Comic Strip. There is a great image of the bungalow in the “Ingeborg Willy” book Robert Cowan published.

The bungalow was located to the south of the sound stage, which was built in 1931, and to the east of the original studio building, which had been constructed in January/February 1926. The bungalow was one of several structures to make the move to Burbank in 1939/1940, where it is still used today.

I don’t think the woman who is the focus of all the attention is wearing a uniform. I think it’s just a classy looking dress of the day.