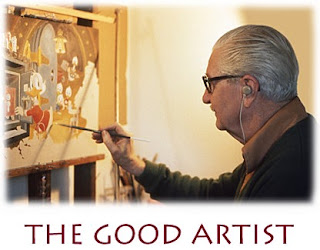 The three news of the day are all coming from Joseph Cowles.

I had the pleasure of exchanging a few emails with this Carl Barks expert" last week and this lead me to three discoveries that I wanted to share:

1. Joseph has a great web site called The Good Artist, which features fascinating articles he wrote about Barks.

2. Joseph sent me the Donald Duck figurine below with the following note:

[Your image of the ceramic piece reminded me of this item an old friend gave me several months ago. It appears to have been carved in the 1930s; the wood may be monkey pod, and I have been wondering whether it was originated at the Disney studio as a mock-up for some project, carved by a talented and bored sailor aboard a ship in the Pacific, or what its source may have been. Perhaps you or your readers can shed some light on this lovely sculpture. It's about a foot high.] Any ideas? 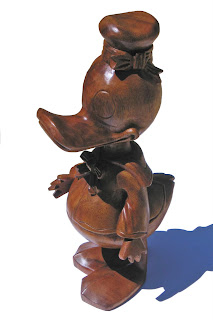 3. Joseph is also working on a very exciting project which I will mention again soon on the blog. In the latest issue of the Carl Barks Fan Club newsletter John explains the full background that led to the project. Here is a summary:

Joseph managed to get in touch with Barks thanks to Roy Williams and here is what followed "Eventually I typed up and sent him (Barks) a popcorn wagon tale—which included
gags he had inspired. What fun! Carl turned it into “The Candy Kid,” incorporating his gags and discarding the rest of my yarn. He did, however, use my character, “Mr. Stumble”—a gentle
Frank Stabile, manager of most of the eateries in The Magic Kingdom.

Recently, while sorting through boxes of family documents and photographs held in storage since the Sixties, David came across a mint copy of DELL’s Walt Disney’s Comics and Stories in which
“The Candy Kid” was first published: Issue 263, August 1962. Along with the comic book was a typewritten copy of the story idea I’d sent to Carl. And along with that, handwritten in pencil, were Carl’s original notes for “The Candy Kid!”]
And now for the great news from Joseph himself:

[We hope to be able to offer an archival portfolio of reproductions of Carl's twelve handwritten manuscript pages, reproductions of the three-page carbon copy of my original story idea that led to Carl's manuscript, a reproduction of the typed letter in which he first suggested doing a popcorn story, and a full-size reproduction of Carl's "Popcorn Boy Joe Cowles " gag panel. That would amount to 18 loose folio sheets printed on one side of heavy acid-free stock, within a portfolio cover. I will number and signed each set, and include a reproduction of Carl's signature.
We plan to do short press runs, somewhat "on demand," with numbering and fulfillment in the sequence in which the orders are received. Our publishing firm is set up to accept VISA and MasterCard (and Discover, too, I think). We hope to be able to keep the price under $125 plus shipping, at least for the first batch of 50 or so portfolios. I have an idea for a couple of neat things to include as surprise bonuses, too. ]
Posted by Didier Ghez at 3:18 AM

I see that Joseph Cowles visited Barks for the first time in the fall of 1960, only a few months after Barks was visited by the Spicer brothers, which I've covered in a current Potrzebie post titled The Good Duck Artist Unmasked.