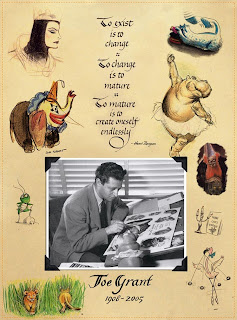 It would take a true miracle for John Canemaker's new book, Two Guys Named Joe: Master Animation Storytellers Joe Grant and Joe Ranft, not to become number one this year in my selection of best Disney history books of 2010. I have just received my review copy and none of you should miss this spectacular volume.

John Canemaker is a great storyteller and every single one of his books is a pleasure to read. John is also one of the very best Disney historians, whose level of research is equaled by very few. Finally, John knows every single Disney-related document that has already been released and is therefore able to select extremely unusual material to illustrate each of his books. Two Guys Named Joe ranks among John's three best books about Disney, along with Before the Animation Begins and Paper Dreams - The Art and Artists of Disney Storyboards. The text is gripping, the illustrations are fascinating.

There is so much to say about this book that this short review will have to be somewhat superficial. In addition to John's talent, the complex personnalities of the two artists he writes about turn their life stories into tales with real depth. There is nothing boring in the careers of those guys named Joe. The huge ego of Grant, the unexpected dark-streaks of Ranft, their passion for life, the infinite imagination of both make them three-dimensional beings which only the most gifted storytellers could have created. They are, in other words, beautiful individuals that John knew, understood and rendered with talent.

And then there are the documents that John selected to illustrate the book: from Ranft's irreverent gag drawings to drawings he did as a kid, from weird sketches that remind you of the dark imagination of Tim Burton, to storyboards from a few abandoned projects; and from Grant's early caricatures to his most recent doodles or the drawings he created with Dick Huemer for the Square World project (there are two full pages of those in the book).

To top things of, John included several caricatures and gag drawings created by John Musker. As far as caricatures go, John is probably today's equivalent of T. Hee and those gag drawings will without a doubt be as memorable for generations to come as T. Hee's were when we bought Frank and Ollie's book The Illusion of Life.

In summary: I love this book and you will too.

Reading it and looking at it made me think how much I would love to see John tackle a book about Norm Ferguson, Hams Luske, Freddy Moore and Art Babbitt and how much I would like to see a great book about the Model Shop Department released some day. For now, though, I will spend the next few weeks getting better acquainted with two guys named Joe.
Posted by Didier Ghez at 1:07 PM

My friend Dennis has several interviews he conducted with Disney Model Department staff. They remain unpublished to this day. We have talked several times about writing a book on the Model Department, but to date have not done anything in this regard.

John Canemaker will be unveiling the book during events Aug. 13 and 14 at the Walt Disney Family Museum at The Presidio of San Francisco. If you're a fan of his work or the work of Joe Grant or Joe Ranft and can make it to S.F., it should be a wonderful discussion.