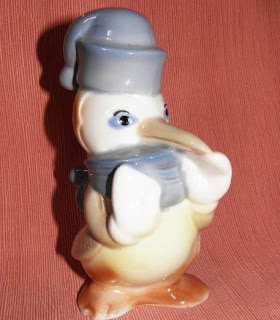 I picked up two great Spanish Disney items last week, one of which is this figurine of Pablo, the Cold Blooded Penguin made in the '70s in Spain. I had no idea that this type of Disney figurines had ever been produced in Spain and I immediatly tried to find a way to write an article about them. I was lucky enough to soon identify a collector who could help (in Germany, of all places) and thanks to him was able to find a bit more about the company that created this version of Pablo.

"The company Palés S.L. was established in the early '30s in a small city close to Valencia called Manises by a man called Eduardo Palés. The factory was built at Calle Valencia, 29. It originally produced sanitary materials but in the late '60s the market for those types of products collapsed and the company started focusing on producing cermaic figurines. Around 1969 it acquired a Disney license and from that year until 1984 produced Disney figurines in ceramics meant to be exported to Venezuela, Puerto Rico, UK, Canada, Japan and the U.S. The company closed in the late '80s."

The article I am currently writting based on this information will be released in a future issue of the magazine Tomart's Disneyana and will contain dozens of illustrations.
Posted by Didier Ghez at 10:37 PM

Oh boy, I love this Pablo! What an excellent find, Didier.

Very nice find! I've always loved that segment of Three Caballeros, unknown though it might be to today's Disney fans. I'm kind of amazed some company thought the character popular enough to make a figurine out of.

That's excellent. I have a friend who's slightly penguin-obsessed and she would love one of these.

I have ‘Scamp’ produced by this company