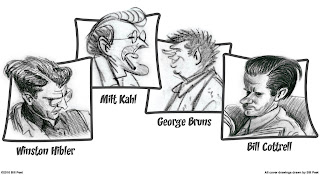 I had the pleasure of sending the manuscript of Walt's People - Volume 10 to the "editorial board" yesterday for review. This means that I am expecting this new volume to be released by November this year.
As a teaser, here are my introduction as well as the table of content + a draft of the cover drawing, with caricatures created by no other than Bill Peet himself.
[Having reached Volume 10, I was bound to reflect on what has been achieved to date through this slightly crazy project. A key sense of pride comes from the community that is being built around Walt’s People: a community of Disney historians and enthusiasts all working together to make this series a reality.
Needless to say, the Disney historians who contribute their interviews are the keystones of the edifice, but the whole structure would fall apart or take shape much more slowly if it weren’t for a handful of enthusiasts who also play a critical part in this endeavor: digitizing and transcribing interviews, copying tapes, sending me links to new leads, spreading the word about the project,… In other words, helping us uncover more lost treasures and making them available to a wider audience each day.
A few days ago I received the transcription by Germund Von Wowern and Jim Korkis of a long-lost interview with Paul Murry by Donald Ault. Earlier in the year, Jim Korkis had sent me a rare letter by English artist Basil Reynolds, another Disney comics legend. This week, thanks to Todd Pierce’s help, we managed to recover a two-hour-long interview with Admiral Joe Fowler, whose very existence had been forgotten. Then comes the harrowing but highly rewarding task of transcribing the hundreds of interviews with Disney artists conducted by John Culhane from the ‘60s to the ‘90s. Not an easy task, when one takes into account the age of the tapes and the resulting amount of background noise, but a task that enthusiasts like James D. Marks, Edward Mazzilli, Daniel Caylor, Neil Sudgen, Robert Kolakowski, Scott Huitt, Michael Crawford, Dave de Caro, Andy Wakeley, Michael Earls, Mike Grygo, and Oswald Iten have tackled without fear.
Of course, getting access to so much material also has the healthy effect of underlying the obvious gaps. Which is how Julie Svendsen suggested to interview Walt Peregoy, how Pete Docter came to interview Art Stevens, or how I decided to contact Marge Champion, Ray Aragon, Vic Haboush, Joe Hale, Ruthie Tompson, and Carl Bongirno, who each filled a different gap in Disney history.
My other great joy comes when Walt’s People helps “feed” or inspire other Disney-related projects: From the bonuses on the Snow White Blu-Ray, to the upcoming books about Art Babbitt or “Walt before Mickey” to name just a few.
And then sometimes there is sadness. Sadness when some of the artists I interviewed die unexpectedly. Sadness when Disney historians or enthusiasts pass away. Or a different kind of sadness when I realize that some documents seem to have permanently disappeared: some of Christopher Finch and Linda Rosenkrantz’s interviews, some of Frank and Ollie’s, and most of Bob Thomas’ notes and transcripts. The loss of many interviews that Bob Thomas conducted for The Art of Animation (1958) and for Walt Disney – An American Original is particularly tragic as it includes discussions with many artists that only Thomas interviewed.
The good news, however, is that thanks to the Disney Archives half of those interviews still survive and that, thanks to Bob Thomas’ special authorization, they are being released in this volume for the first time.
An even happier news is the fact that more than half of the interviews Thomas conducted for his biography of Roy O. Disney also survived and will probably appear within Walt’s People in the years to come.

It's a pleasure to help wherever I can. But it's pure joy to read these interviews.

Very cool. I can hardly wait!!

It looks like another fantastic volume. Thank you for continuing with this project.

Really looking forward to it!

Congratulations!
I am so excited!!1

You should get Bill Peet to do more covers! =)

And T.Hee, and Joe Grant and a few others. I know. I will try that in "another life" though :-)