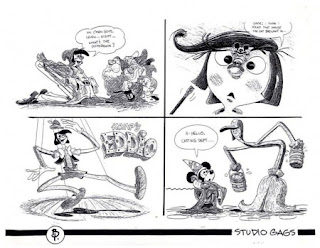 - Disney Historian Jim Korkis talks about the history of the relationship between Disney and the Muppets including the extensive plans for the Muppets that Disney had in 1990 at this link.
- PK&A Studio Gags by Michael Sporn
- “The Men Who Would Be King” recalls the bad old days when Disney, DreamWorks & Pixar used to brawl by Jim Hill
- Imagineer Rock Hall Remembers by Wade Sampson
- SPEAKING OF CHARACTERS-Cliff Edwards by Paul F. Anderson
- WALT AND THE ADMIRAL BUILD A MOUNTAIN by Paul F. Anderson