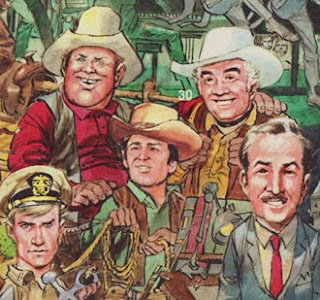 [In 1965, NBC television hired famed cartoonist Jack Davis to draw caricatures of all of its stars to promote the new television season. Walt Disney was doing his weekly Sunday night show for NBC in living color and so Davis caricatured Walt both in a beautiful color mural and in the black and white ad for Sunday night.]
Posted by Didier Ghez at 2:59 AM